Vibration results in dynamic deflections of and within the material. These dynamic deflections and associated velocities and accelerations may cause or contribute to structural fatigue and mechanical wear of structures, assemblies, and parts. In addition, dynamic deflections may result in impacting of elements and/or disruption of function. Some typical symptoms of vibration-induced problems follow. This list is not intended to be all-inclusive: Chafed wiring, Loose fasteners/components, Intermittent electrical contacts, Electrical shorts, Deformed seals, Failed components, Optical or mechanical misalignment, Cracked and/or broken structures, Migration of particles and failed components, Particles and failed components lodged in circuitry or mechanisms, Excessive electrical noise, Fretting corrosion in bearings. 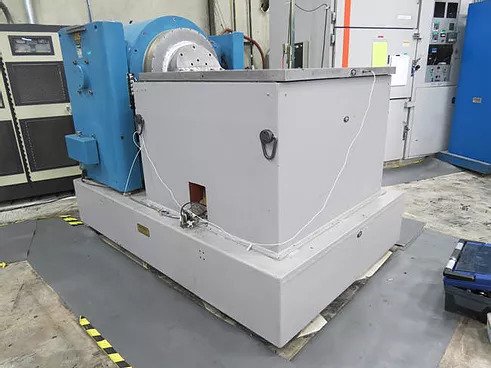 Essentially all material will experience vibration, whether during manufacture, transportation, maintenance, or operational use. The procedures of vibration methods address most of the life cycle situations during which vibration is likely to be experienced.

Random Vibration test is conducted for the purpose of determining the ability of component parts to withstand the dynamic stress exerted by random vibration applied between upper and lower frequency limits to simulate the vibration experienced in various service field environments. Random vibration is characteristic of modern field environments produced by missiles, high-thrust jets and rocket engines. In these types of environments, random vibration provides a more realistic test. For design purposes, however, a swept frequency sinusoidal test may yield more pertinent design information.

The high-frequency vibration test is performed for the purpose of determining the effect on component parts of vibration in the frequency ranges of 10 to 500 hertz (Hz), 10 to 2,000 Hz or 10 to 3,000 Hz, as may be encountered in aircraft, missiles, and tanks. The choice of test condition severity should be based on the frequency range and the vibration amplitude dictated by the applications of the component under consideration and the state of the component part in relation to resistance-to-vibration damage.

To determine the suitability of the devices for use in electronic equipment which may be subjected to moderately severe shocks as a result of suddenly applied forces.

The shock test is intended to determine the suitability of the devices for use in electronic equipment which may be subjected to moderately severe shocks as a result of suddenly applied forces or abrupt changes in motion produced by rough handling, transportation, or field operation. Shocks of this type may disturb operating characteristics or cause damage similar to that resulting from excessive vibration, particularly if the shock pulses are repetitive.

To determine the mechanical limits of the package, internal metallization and lead system, die or substrate attachment, and other elements of the microelectronic device.

This test is used to determine the effects of constant acceleration on microelectronic devices. It is an accelerated test designed to indicate types of structural and mechanical weaknesses not necessarily detected in shock and vibration tests. It may be used as a high-stress test to determine the mechanical limits of the package, internal metallization and lead system, die or substrate attachment and other elements of the microelectronic device. By establishing proper stress levels, it may also be employed as an in-line 100 percent screen to detect and eliminate devices with lower than nominal mechanical strengths in any of the structural elements.

To verify that metals or protective coatings will prove satisfactory under any corrosive condition, or to detect the presence of free iron contaminating the surface of another metal.

The salt-spray test, in which specimens are subjected to a fine mist of salt solution, has several useful purposes when utilized with full recognition of its deficiencies and limitations. Originally proposed as an accelerated laboratory corrosion test simulating the effects of seacoast atmospheres on metals, with or without protective coatings, this test has been erroneously considered by many as an all-purpose accelerated corrosion test, which if “withstood successfully” will guarantee that metals or protective coatings will prove satisfactory under any corrosive condition.

Experience has since shown that there is seldom a direct relationship between resistance to salt atmosphere corrosion and resistance to corrosion in other media, even in so-called “marine” atmospheres and seawater.

However, some idea of the relative service life and behavior of different samples of the same (or closely related) metals or protective coating-base metal combinations in marine and exposed seacoast locations can be gained by means of the salt atmosphere test, provided accumulated data from correlated field service tests and laboratory salt atmosphere tests show that such a relationship does exist, as in the case of aluminum alloys. (Such correlation tests are also necessary to show the degree of acceleration, if any, produced by the laboratory test).

The salt atmosphere test is generally considered unreliable for comparing the general corrosion resistance of different kinds of metals or coating-metal combinations, or for predicting their comparative service life. The salt atmosphere test has received its widest acceptance as a test for evaluating the uniformity (specifically, thickness and degree of porosity) of protective coatings, metallic and nonmetallic, and has served this purpose with varying amounts of success. In this connection, the test is useful for evaluating different lots of the same product, once some standard level of performance has been established. The salt atmosphere test is especially helpful as a screening test for revealing particularly inferior coatings. When used to check the porosity of metallic coatings, the test is more dependable when applied to coatings that are cathodic rather than anodic toward the basic metal.

This test can also be used to detect the presence of free iron contaminating the surface of another metal, by inspection of the corrosion products.

To determine the resistance of the part to sudden exposure to extreme changes in temperature and the effect of alternate exposures to these extremes.

This test is conducted for the purpose of determining the resistance of a part to exposures at extremes of high and low temperatures and to the shock of alternate exposures to these extremes, such as would be experienced when equipment or parts are transferred to and from heated shelters in arctic areas. These conditions may also be encountered in equipment operated non-continuously in low-temperature areas or during transportation. Although it is preferred that the specimen reach thermal stability during the exposure specified, in the interest of saving time, parts may be tested at the minimum exposure duration specified, which will not ensure thermal stability but only an approach thereto. 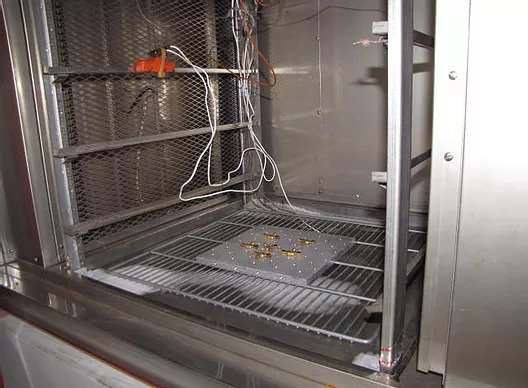 Permanent changes in operating characteristics and physical damage produced during thermal shock result principally from variations in dimensions and other physical properties. Effects of thermal shock include cracking and delamination of finishes, cracking and crazing of embedding and encapsulating compounds, the opening of thermal seals and case seams, leakage of filling materials, rupturing, or cracking of hermetic seals and vacuum glass to metal seals, and changes in electrical characteristics due to mechanical displacement or rupture of conductors or of insulating materials.

Experience how Infinity Laboratories
goes Beyond Testing to meet your needs